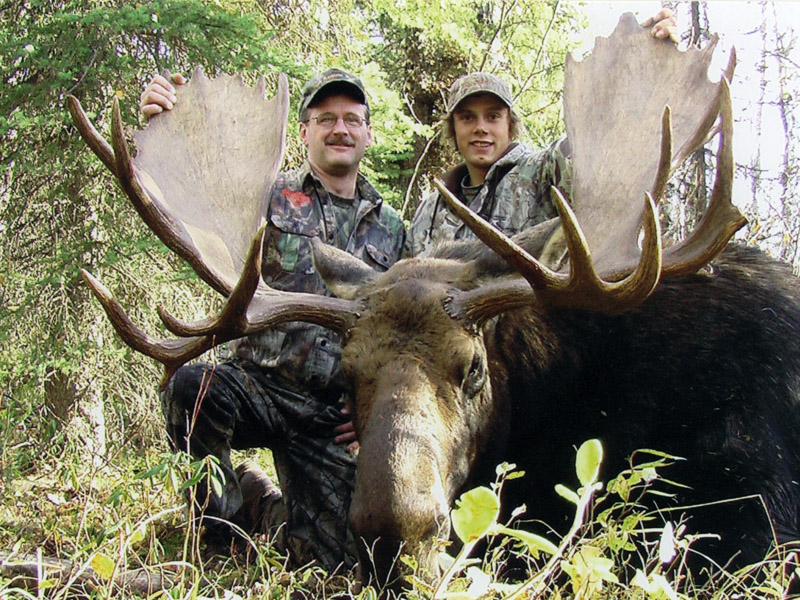 This was our second trip to Wild Kakwa Outfitters in Grande Prairie, Alberta. My dad, Ray and myself had a wonderful first trip, which you can read about by clicking here.

We were picked up by Rita at the motel and taken out to camp in the early afternoon. There we meet all the guides and saw the new accommodations that we would be staying in . Everybody got settled and got their rifles sighted in and we were off with our guides on mostly a scouting mission.

Ricky was our guide again on the trip, which was our request. My dad and I really enjoyed hunting with him on our first trip and he did a great job.

That first night we went to a place which was only about 100 yards from the place that I had killed my bull 2 years previous. Ricky was calling and it didn’t take long before we had a reply from a bull. We followed the bull around for awhile and ended up back by a water hole that we were standing at when we first heard him. The bull appeared and we could see he had really big paddles but it was too late and too dark to be thinking about shooting.

The next morning he took us back to the same location but we ended up walking farther down a cut line. Soon we heard the grunting of a bull, it was a long ways away but seemed to be getting closer. Ricky was cow calling and the bull was grunting the whole time. The bull got to the top of the hill and he was closer than we thought so there was a bit of a scramble to get into position. We worked our way through some thickets and got into an aspen meadow that was okay to shoot in. The bull was working his way towards us with Ricky’s cow calls. I was carrying a .50 Caliber Thompson Center Encore Rifle. I could hear the bull getting closer and heading for a clearing we had picked out. The clearing was about 100 yards across with a valley in the middle. I knew I only had one shot and had talked with Ricky about that before the hunt. I told him that after I shot that he needed to keep an eye on the bull so I could reload. Anyway, the bull took his time in showing himself so we couldn’t see how big he was. We could hear the bull racking his rack in the brush, I looked at Ricky and his eyes got real big. That told me how big the bull was, I looked across the meadow and saw him working his way over a ridge. There was one spot to shoot that was really clear and I waited until the bull hit the clearing and shot. The smoke filled the air, I had no idea what the bull was doing, I just knew that I had hit him. I started to reload the gun and Ricky kept an eye on the bull. Ricky was also doing my video tape so he was busy. The bull never knew where the shot had come from, after reloading the bull started to work his way toward us holding up his right front leg. He stepped into another clearing and I let the second shot go. This hit him in the neck and went into his vitals. I started to reload again and looked up in time to see the bull fall down. After reloading we started to work our way up to the bull and he still had his head up. We didn’t think he could go anywhere so we got closer. Guess What? He jumped up and I had to take a third shot. He fell only 20 yards from where I shot the first time. We walked up to the bull and he was huge. 51 inch spread with huge paddles on each side. I was really thrilled to have killed a bull of this size with my Muzzleloader. We did measure the bull back at camp and he measured 191 Boone and Crockett.

The very next day my dad took an amazing bull that had been fighting and broke off one side of his paddle.

I really enjoy going and hunting with Wild Kakwa Outfitters, they take great care of you and work very hard to make your stay great.