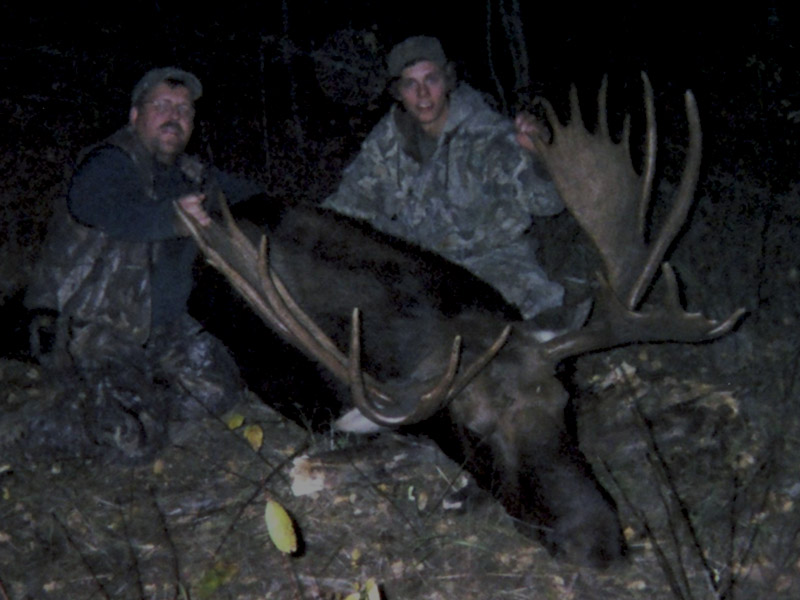 What an adventure. And the best part was this trip exceeded it’s build up of expectations. After finding Wild Kakwa on the Internet, and having wanted to go on a moose hunt ever since I can remember, it was nearly unbearable to find out that I would be looking at a two year wait to get on their list.

The first couple of days were warm and windy. Not the best situation, but we covered a good bit of ground in the tight quarters looking for some action where the bulls could hear us. The highlight was seeing a huge Grizzly strolling in the trail ahead a hundred yards as we were working back to the four wheeler. What wasn’t so cool was the 700lb bear following us for a minute or two when he spotted us. The only problem was, I knew I was the slowest of the bunch.

The next few days brought a great deal of adventure, calling in a few small bulls, up close interaction with some moose cows and calves, dozens of deer (both mule and whitetail), some elk, a pine martin, coyotes, a wolf, a couple of fox and some black bear. Oh yeah, and another grizzly at 30 yards that needed a reminder that even though we sounded like a cow, we weren’t and that there were no calves with us for a late afternoon snack. Even as most of the other hunters filled their tags in rapid succession, those of us who were still looking were not concerned. The folks at Wild Kakwa are always comparing notes in order to optimize your trip and adjusting plans.

By the 7th day, the other folks in my group had tagged out, and I was more than content with the experience. While I realize they take their Moose population control pretty serious, I was happy if I left with a nice picture of my two hunting buddies and their moose. I had always felt that it doesn’t matter what you get as much as enjoying the time. I was on cloud nine, seeing the fantastic bulls the guys I talked into this trip had. Two out of three of us is fantastic on MOST outfitters scales. Well, Rick was not about to let me off so easy. He took me out, with the added bonus of Matt. Two guides with one hunter, like I said, they pull out all the stops. It was a rare and much appreciated treat to watch the two guides work. In spite of their best efforts, and an awesome stalk up some hills through some very “moosey” terrain through a bull’s backyard and back down, they just weren’t responding to the calls.

That afternoon, Rick was back with a couple of guys looking for bear, and I grabbed my brother Joe and buddy Tom to hit it hard with Ricky. The plan was to work a couple of spots where the guides had seen some moose, in addition to a few where we had some close encounters earlier in the week. Every place looked good, and the wind was nonexistent, but the first couple of miles proved fruitless. We then moved down the road to a spot where for a couple of days the big bulls were getting the best of us and staying a few yards in the shadows. The four of us worked up an old logging trail for a mile or so, with Ricky doing his best to flirt with Bullwinkle. As we approached a point in the hike where it would take longer to get back to the road than we had light, Ricky made the decision to turn around and slowly cow call our trail in to see if we had interested anyone. As Ricky had said, sometimes they take their time in getting to the cows. Then, as we could see the light of the clear cut that adjoined the road, we heard that beautiful sound of a bull grunt. Joe and Tom froze in their tracks as Ricky and I went into super stealth mode and snuck up to the continual grunts. As we approached the road the sights of trees moving and the sounds of a lovesick bull erupted full force just on the other side. I steadied up against a tree for both support and camouflage as the bull emerged from the brush. Oh no, all I can see was some darn good antlers and the top third of its back through the brush. The next thing I heard was Ricky and one word, “SHOOOOT!” I told him I don’t have a good shot. His only response was “SHOOOOOOT!” Well, even I can take a hint that it was a very good animal so I figured the best spot and let the 36 yard shot rip. The monster dropped in his tracks. Ricky and I both let out a yell and after running, high fiving, were were looking an what can only be described as an ultimate dream come true. After covering more than a few miles in some very thick stuff, I had a moose down ten yards off the road. While some guys would credit fate or past good deeds, I credit the hard, hard work of Wild Kakwa. They deserved an easy retrieval after having on bull down in an evening and three more down the following morning earlier that week. Joe and Tom caught up after the shot and joined the excitement. It was truly an added pleasure to have your hunting partners around to enjoy the moment. It is now a week later as I write this and I still look at the pictures and am in awe and disbelief of the nice bull.

Rest assured that the dreams you will have until you arrive at camp of a top class Canada Moose hunt will soon come to life. Rick and the guides simply do not stop until you have your bull in camp. Rita and Kelly will do their best to get you home heavier than you left with delicious, hearty food and awesome desserts after every meal. But most of all, they are constantly looking to make the total experience a success by giving 1000%. I would tell you about the accommodations, but Rick is constantly evolving and adapting to the setup to make your trip more enjoyable and comfortable.

Thank you Rick, Ricky, Joe, Mel, Matt, Rita and Kelly for your efforts. You folks are simply a bunch of the nicest people I’ve ever met. We are booked for 2007 elk and for 2008 deer. It’s hard not to return to such a place when you know they treat you like family.