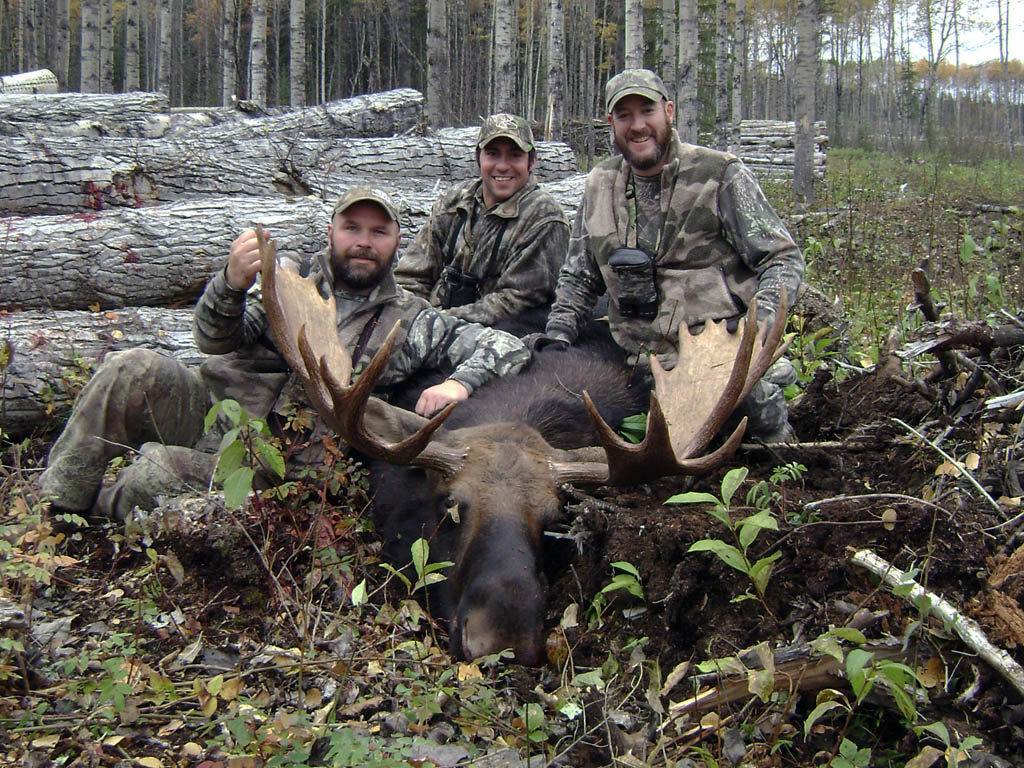 As you can see from the smile on my face (wife commented that she’d never seen me smile like that before) I was very happy with the way my hunt turned out. My buddy Jay (left) and I booked this trip 18 months in advance and patiently waited for our hunt date to arrive, not really knowing what to expect when we got to Wild Kakwa’s camp.

We had many long discussions about what we hoped for and what we’d settle for towards the end of the hunt. This discussion continued further during our drive up to Grande Prairie from Washington.

Upon arriving at camp we were both thoroughly impressed by Wild Kakwa’s set-up. The cabins were very nice and the large mess hall/kitchen was a great place for regular discussions about how everyone’s hunts were going and just generally getting to know one another. The same can be said about the nightly campfires. We had a great group of guys from all over the country and I thoroughly enjoyed meeting them all. Additionally, be prepared to eat and eat a lot. The food that Rita put together for us each day was simply amazing!

After three days of hunting and passing up a few smaller bulls, Jay and I were split up so that we could have one on one guiding to improve our opportunities since some of the other guys had already fill their tag. Jay ended up shooting his bull on the morning of the fourth day. When my guide Matt (middle) and I returned to camp, Jay gave me the thumbs up. He said that he had shot a bull a little over 40 inches. I said “Hey, that’s great, how much over 40 inches?” He said fourteen! I couldn’t believe it until I saw the old beast he had taken. I told Matt that we’re eating lunch fast and getting back out there since now the pressure was on. Matt and I had tried a few different places and then he decided we’d walk into a spot and call until dark. All the while, I’m thinking about Jay’s bull and how I’m going to be hearing about it on our 15 hour drive home.

On the way into this spot, Matt grabs me and we duck behind a log deck. He tells me there is a good bull in an adjacent clear cut. I ask him how big it is and he tells me it’s a little over 40 inches. So I’m thinking to myself whether I’m ready to take a low 40s bull or if I want to wait since I still had four days of hunting left. I tell him that a low 40s bull might not be too bad. He says “No, it’s a little over 40 inches!” I tell him that I heard him the first time and he repeats himself again. Took awhile, but the light bulb finally came on. I was able to use the log deck as a solid rest and pulled the trigger. He wasn’t fourteen inches better than 40, but he was eleven and that was certainly good enough for me! Both Matt and I were ecstatic.

All in all, the experience could not have turned out better. Jay and I each took a bull bigger than we could have reasonably hoped for. The people we met, including everyone involved with Wild Kakwa, were simply great. The atmosphere in camp cannot be topped. Our discussions on the way home involved how fortunate we both were to have been able to go on this hunt and meet all of these people. It was a quick ride home.”