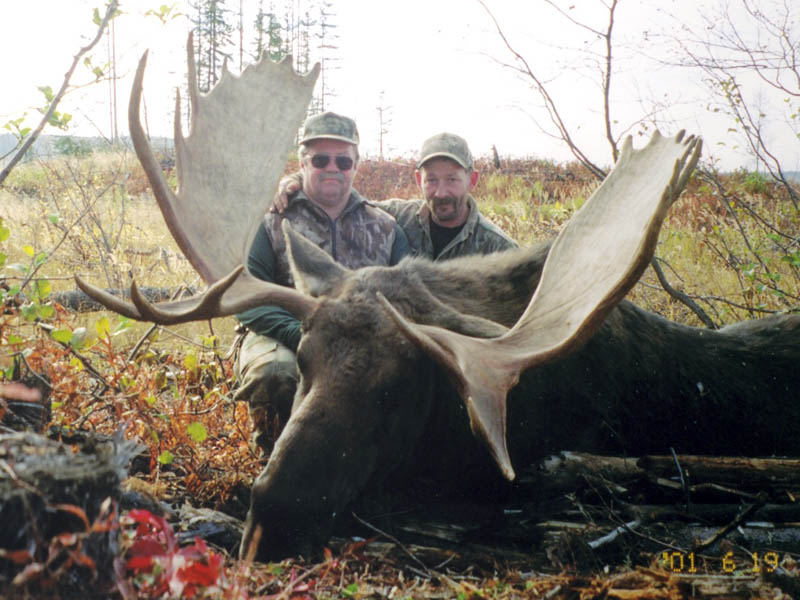 My friend Rich Boulanger and I hunted with Wild Kakwa Outfitters. Rich was the first to score on a nice 40″ moose midway through our hunt. He and his guide, Ricky had quite a hunt.

They called to a bull that responded but would not come in. As Ricky called, Rich moved forward towards the bull who was very agitated. When Rich topped a ridge, there he was raking a tree 15 yards away. Rich made a nice shot and the bull went right down.

I was the last hunter in camp to harvest a moose. On the last morning I could hunt, my guide, Mel, and I ran across two cow moose about 450 yards across a clear cut. We got in position to view the area behind the cows and there he was. Mel stated it’s a (!@#%^) monster! It takes a good amount of horn to impress Mel, who is a very experienced guide. We decided to stalk into position because if we called, the cows might take the bull away. We duck walked and belly crawled to within 60 yards of the big bull. I shot the bull and after he went down, Mel and I celebrated as the two cows started to strike each other. What a sight! The bull scored 183″ total!

Thank you Mel, Rick, Rita, Ricky and Kelly and all the guides at camp for the trip of a lifetime. Earlier Rick Sr. called a 30″ bull to within 15 yards and I decided to pass on him, that turned out to be a good decision. On my trip I saw a huge black bear, a grizzly sow and two cubs, three wolves, a 6×7 and a 5×5 bull elk and about 20 cows. A golden eagle, whitetail deer and mule deer. I am booked to return for my 4th year in a row. Again I am counting the days.