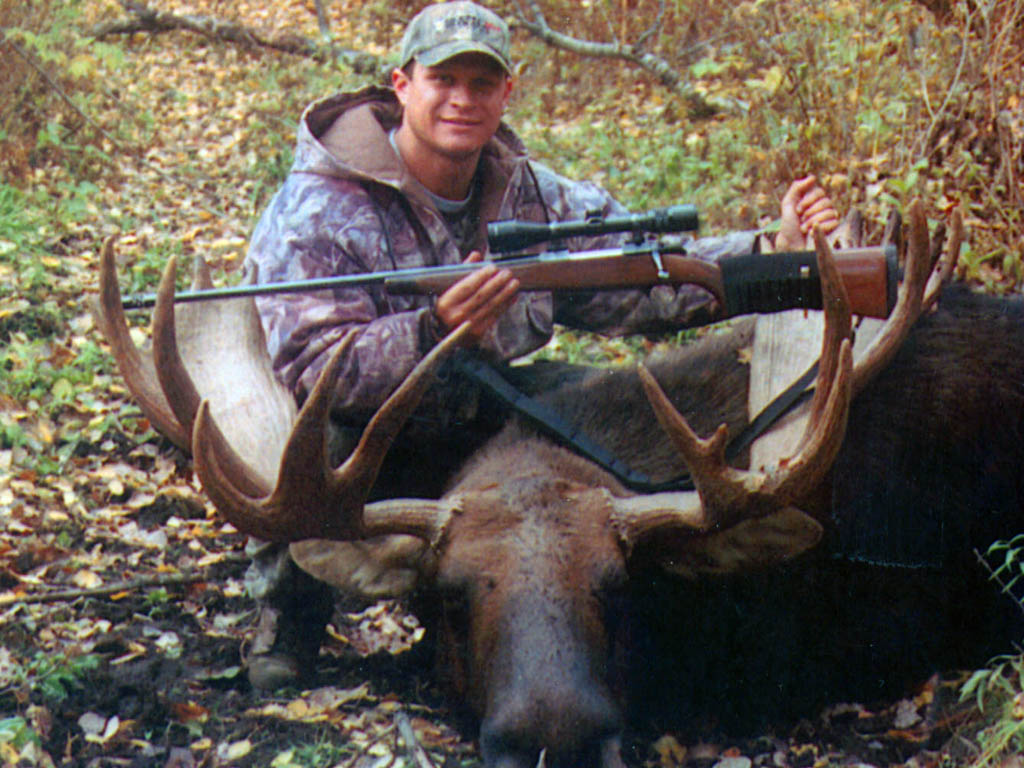 My brother Kurt, and I had looked forward to our Moose Hunt ever since the day we booked the hunt with Wild Kakwa Outfitters. We had both been to Canada before on Whitetail, and Black Bear hunts, but this was the first time we were to be hunting Moose. We were unsure of what to expect of the hunt, but had heard good things about Wild Kakwa Outfitters and the quality outfitted hunts they provide for Bull Moose.

Rick Houweling owner and guide for Wild Kakwa was very helpful in providing insight of what to expect of the hunt. He sent us descriptions of the type of terrain we would be hunting, along with a pack list of clothing and hunting accessories to bring along. Kurt and I planned to come back from this hunt with Trophy Moose, and it was encouraging and exciting to hear of the pre-season scouting efforts Rick was doing all summer long. We knew we were with the right outfitter.

Once in Grande Prairie, we were met at our hotel and taken to Rick’s house to meet up with the rest of the camp. This is where we met Rick and our other two guides Charlie and Jake. Talk about a couple of characters.

Of all the hunts I have been on, Rick and his guides were the most fun to be around, and it was very evident that their number one interest and concern was to work hard to provide us with an excellent experience and trophy moose.

We drove to camp on Sunday afternoon. The camp consists of 3 wall tents with hardwood floors. Two are bunk tents, and the other is the dinning tent. Each bunk tent contains 2 sets of bunk beds and a propane furnace. The beds are very comfortable, and the tent is well heated. Rick’s wife Rita does all the cooking in their camper, and serves the meals in the dinning tent. Rita is an excellent cook and Kurt and I never went hungry.

Once settled in camp, we were off hunting already Sunday evening. Kurt and I went out with Rick, and were very encouraged when Rick called in two small bulls that first evening. Kurt and I mentioned to Rick that we were there to shoot a moose with a spread above 48 inches, and we were willing to work for them. Rick obliged.

The next morning we were off to some of the thickest brush I have ever hunted in. Rick had mentioned how he had seen a very large bull here while scouting. We walked and called the area all morning, but no luck. After lunch, we headed out again, and while glassing a far off ridge, we spotted what Rick called a huge bull. We worked our way down the ridge, and began calling for the bull. My heart was beating as we could hear the bull getting closer and closer. Suddenly he was gone, and our hunt was over for the day. 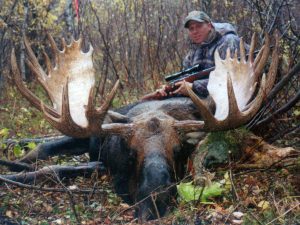 The next morning Kurt and I were off hunting with Charlie, and we headed off to an area where Jake said there were some huge bulls. We began the hunt by calling in a bull near a beaver pond, but could never get a glimpse of him. The winds were gusting on this morning, and we debated if we should cross the valley to the reach the next ridge. The decision was to move forward. Once we entered the wood line again, Charlie gave a cow call, and it was answered. The trees started crashing as the bull moved closer. Kurt ran up the trail 30 yards to get in position for a shot with his Browning 7mm. The trees continued to part, and all of a sudden the largest animal I have ever seen appeared. Kurt got off his first shot, and the bull turned. Kurt’s second shot went right up the spine, and the bull was down. All of us jumped for joy, and I got the whole event on video. Kurt’s bull scored 186 Boone and Crocket, 52 inches wide, and estimated at 1800 pounds.

Once back at camp, Jake came up to me and said Kurt’s bull was going to be tuff to beat, but it could be done. So the next day, Rick, Kurt and I were off again to the area where we saw the huge bull. We were going to work for this one. After walking quite awhile Rick began to call, and boy did we ever get a response. In one direction it sounded as if a truck was coming through the woods. In two other directions we had two bulls grunting back at our call, none of which could be seen. After calling for 45 minutes, the bull at the bottom of the ridge was consistently raking its antlers over the willows. I said to Rick this is the one I want to go after. We began to move towards this bull calling for him as we pursued. As we moved closer, we could hear the bull ahead, leading us away from the other bulls in the area. We ran up and down a number of ridges before coming to the top of one of them, and there he was standing 40 yards away. I raised my Sauer .338 and shot him through the lungs. The moose ran, and my first instinct was to run after him to get another shot off, so I did. After a second shot up the spine, he went down.

It was the most exciting hunt I have ever been part of. He ended up scoring 206 B&C gross, 196 net. His spread was 51 3/8. He is entered into the Boone and Crocket record book. After the experience Kurt and I had, we cannot wait until we can book another trip with Rick Houweling of Wild Kakwa Outfitters.