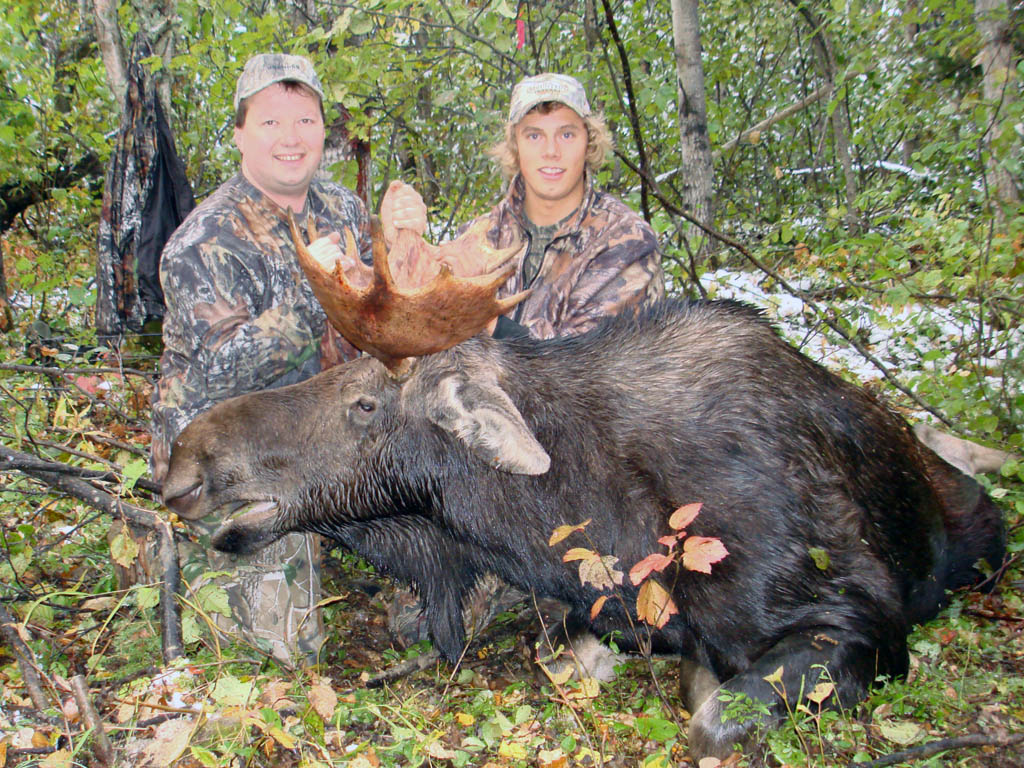 After a couple of days in Banff and Jasper National Parks, we arrived in Grand Prairie for our archery moose hunt with Wild Kakwa Outfitters.  Upon arrival we were greeted with more than we expected in accommodations.

Once the guides returned from their afternoon duties they arrived into camp and we discussed our morning hunts while we enjoyed the first of many exceptional home cooked meals.  After a restless night, we set out to experience our first taste of moose hunting.

Unbelievably, before we even entered the woods we saw our first moose about 100 yards down the trail. We immediately prepared ourselves for the first of what turned out to be numerous encounters. We entered the bush and within 30 minutes Ricky had two bulls grunting and thrashing trees right in front of us. After what seemed like an eternity, the bull finally stepped out presenting Jerry with a 30 yard broadside shot. After high-fives and congratulations it was time to get to work. Ricky, Rick and other guides have a great system to get these animals out of the woods and back to camp. 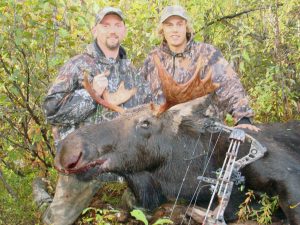 Later that afternoon we were back in the bush in search of a bull for James. We saw numerous bulls over the next three days, but none presented a good shot. Over the course of our 5 day hunt, we saw 16 bulls and 9 cows. On our last day of the hunt we were chasing a monster bull, after several close encounters Ricky decided to try and split up the bull from the two cows that were with him, it worked, and once they were split up the bull became very frustrated and was tearing up the woods. With no luck bringing the moose back into range, we decided to move to a different location and cut the bull off (which ended up being a beaver pond) . We set up and started calling and immediately we heard a response and held tight, it didn’t take long and a cow stepped out. Sure enough, not the same bull but another nice bull followed on her tracks and presented James with a 44 yard shot that hit home. Another moose on the ground for a hunt of a lifetime that we will never forget or ever stop telling anyone who is willing to listen. Wild Kakwa Outfitters is the most qualified, friendly, and organized outfitter that either of us have ever hunted with. Ricky did a great job for us and taught us more than we could of imagined. Rita and Vanessa had a delicious home cooked meal waiting for us everytime we returned to camp and assured that nobody left hungry. Rick runs a great camp with everything well organized, good equipment and friendly hard working guides.

Thank you so much Rick, Ricky, Rita and Vanessa for an experience neither of us will ever forget.