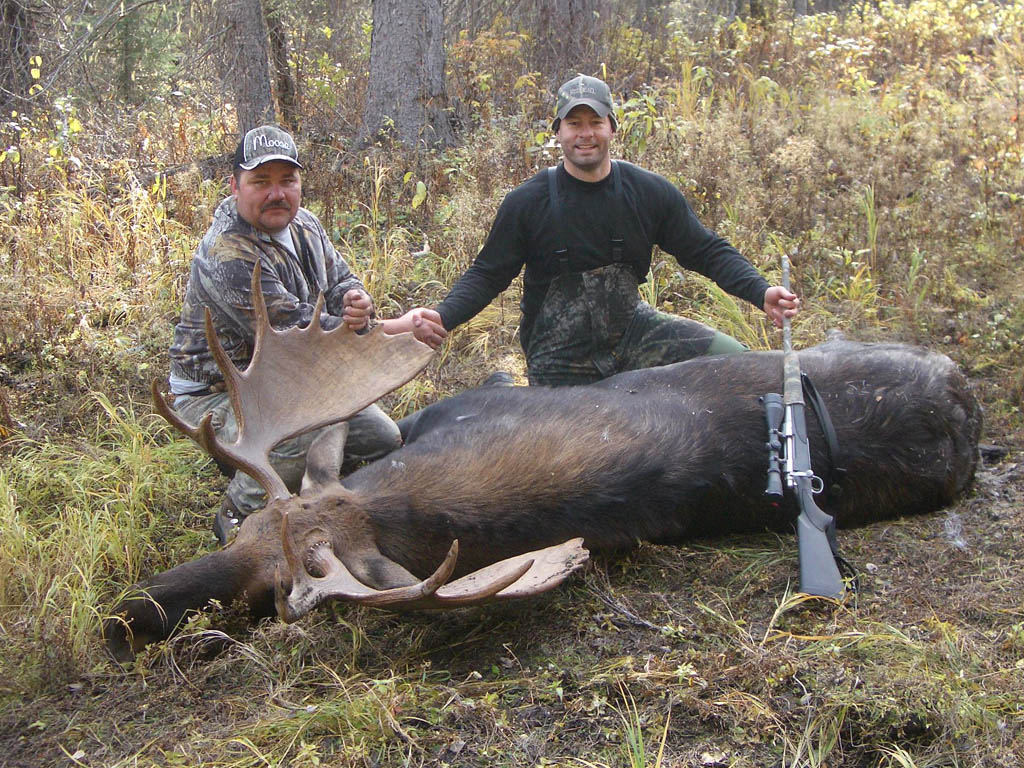 This was not only my first moose hunt, but also my first hunting experience in Canada. And a wonderful experience it was!  Three of my fellow hunters had booked with Wild Kakwa Outfitters before and thus returned with four new hunters (including myself) for a moose hunt with Rick and Rita Houweling in early October.

Our party of seven hunters arrived in Grande Prairie the day before the hunt was to begin. We were met the next morning at our hotel in Grande Prairie by Rick and a few guides who transported us and our equipment about an hour into the beautiful Alberta wilderness. Upon arrival at camp, we quickly arranged our belongings in the heated cabins and prepared to hunt that evening.

After 4 days of hunting and passing on 2 small bulls, I ventured out with my guide, Rick Dahl, on Friday morning. At first, the weather was uncooperative; the wind was blowing loudly, making Rick’s calls very difficult to hear. After a few unsuccessful hours, we decided to walk a clearcut while Rick cow-called. Slightly discouraged, we sat on some downed timber and waited. Noting that the wind had stilled, Rick quietly leaned over to me and said that he would give cow-calling one more try. He did . . . and we both heard an immediate response! For the next 15 minutes, we listened to a 47-inch rutting bull grunt as he made his way directly toward our position. What a thrill! As the moose approached, Rick motioned for me to setup near a tree because, according to his calculation, the moose would be coming out of the woods about 50 yards below our position. Rick couldn’t have been more correct! The moose appeared, stood broadside in the middle of the cut, and Rick gave me the “green light” to take him. My first shot hit him in the heart. He quartered away from us, took a few steps, and started to wobble. I finished him with a second shot. The whole experience was nothing short of breathtaking!

Rick and Rita have a tremendous hunting camp. The accommodations were perfect, the food was excellent, the friendships forged will last a lifetime, the guides were top-notch and the hunting was world-class. I look forward to returning to Wild Kakwa Outfitters soon for another Alberta hunt!