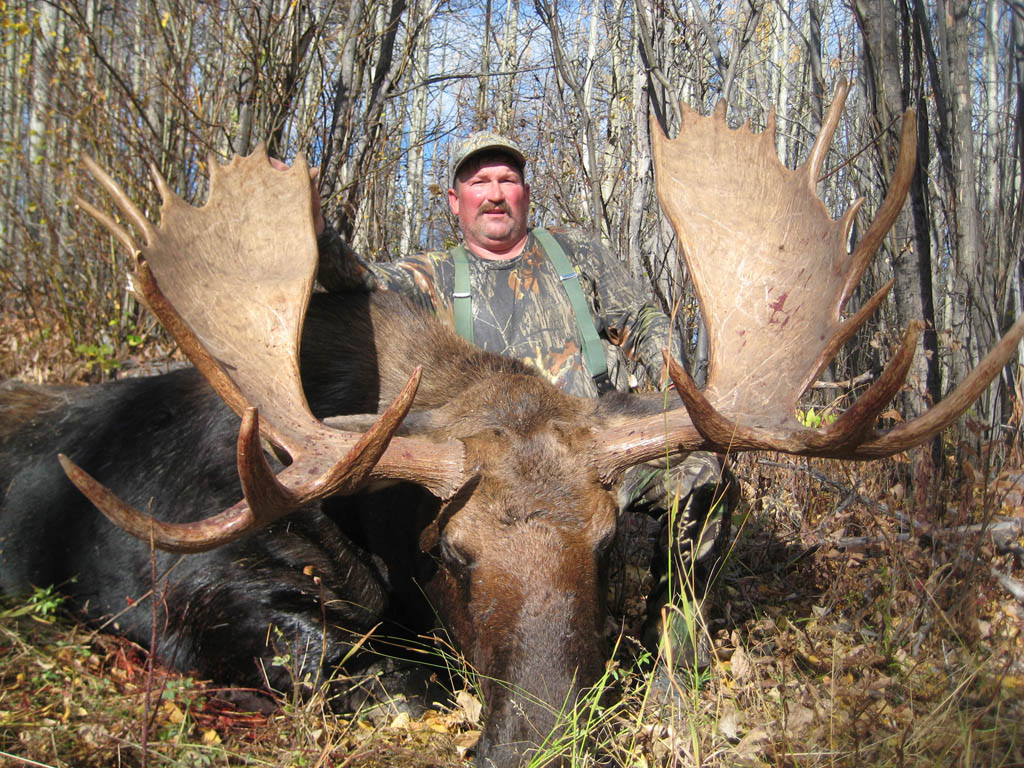 I have just returned from my 5th hunt with Wild Kakwa outfitters and once again, I’m one happy guy.

I don’t know what to say other than Rick and Rita know how to run a hunting camp. Excellent food, great sleeping accommodations (cabins), guides who bust there butts for their hunters, and moose hunting that is second to none. I have hunted with 3 other outfitters in Canada over the years and can say with certainty they are far and away the best I’ve hunted with.

The first morning of this years hunt started off interesting, as my guide, Jared, spotted 5 moose in a cut block at least 4 to 5 miles away. Even at that distance we could tell there was at least one huge bull in the bunch. Our dilemma was how to get across this huge valley and get to them. After consulting with Rick and the other guides at lunch, we concluded the only way to get closer was a 2 hour drive. So our adventure began with many 2 hour drives to our new honey hole. Unfortunately, the weather didn’t cooperate, turning hot (near 80 degrees). On the 4th evening of my hunt, as we were calling just before dark, Jared froze like a bird dog on point and said, “Did you hear that grunt?”, which I didn’t. The cow calling and grunting continued for the next several minutes without the bull budging from the thick cover until darkness ended our day. It was a long and sleepless night wondering if our bull would still be there in the morning.

Before day light the next morning, we started hiking back to where we heard the grunting the night before. As we were slipping in, once again Jared did his bird dog impression and froze stiff, pointing to a grunt 3/4 of a mile away. As we stalked in we could finally see the bull at about 450 yards on the edge of a cut block. As there was nothing to rest on, we decided to try to cut the distance. At about 250 yards, a cow appeared out of a brushy swale and she was looking right at us. Yep, busted. So we froze, still looking for the bull which had now moved towards the cow and was standing directly behind a huge burn pile and all we could see were his paddles, 250 yards away. Jared gently cow called, hoping to draw him out, which made another cow that had been bedded down stand up. Great! Three sets of eyes looking directly at us. The bull would not budge, only moving strait away from us towards the timber line. In desperation, we tried a couple of grunts, and low and behold we could see his paddles turn and start moving ever so slowly toward his prized cows who were about 80 yards from him. One of the cows started moving quickly toward him and we knew it was now or never. Jared asked if I could make the shot free handed and I nodded, knowing it was my only option. The bull took a couple more strides and was now clear and broadside. I fired and the bull just locked up, not knowing that he was hit. I proceeded to empty my magazine. After my last shot I could see the bull go down.

After some high fives we headed to retrieve my prize only to find nothing, nada, zero, zilch. After what seemed like forever looking for this bull, which I was sure I had hit, and to not even find blood, I was as down as you can get, opportunity lost. Jared and I had  been separately looking, when he motioned me over and said we should head out and sight my rifle in because he said and I quote “If you can’t hit a bull at 250 yards free hand, either you are a lousy shot or your scope is off”. Now, as if I didn’t feel bad enough, here is a young man nearly half my age calling me a lousy shot. As we started to leave, my former friend said, “Let me show you something pointing toward where the cows had been standing”, and all I can see are paddles!!!!! After a bit of my best profanity pointed directly at my friend again, my hunt was over. Thanks again, Jared!