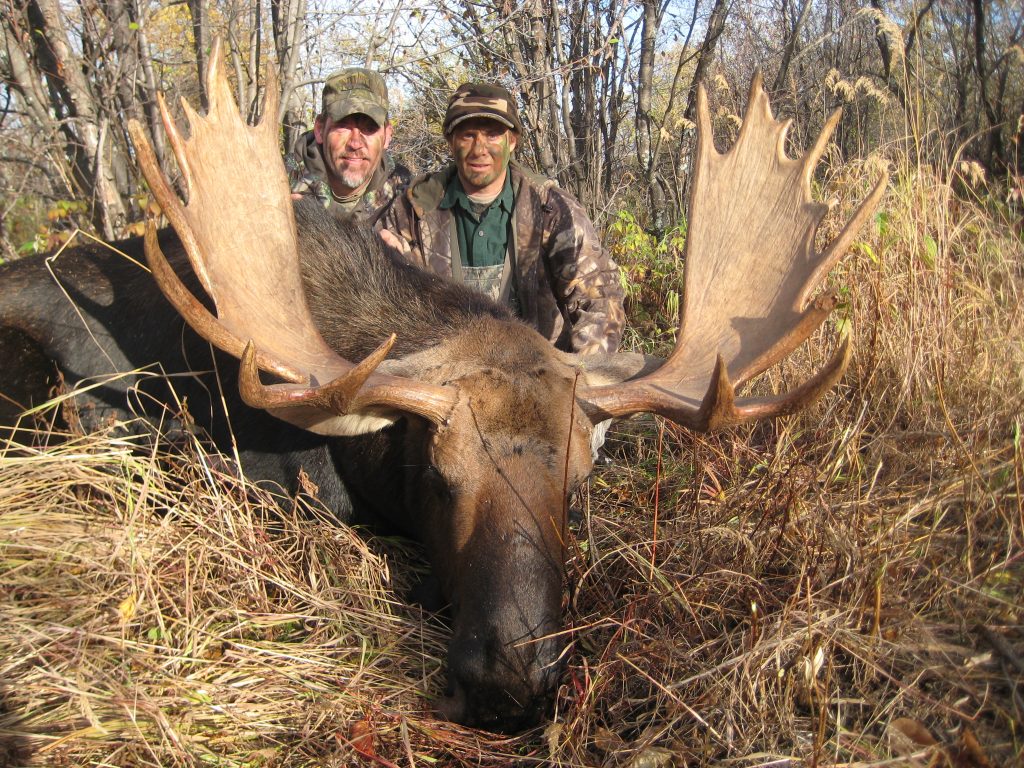 I ventured out with Wild Kakwa Outfitters on my second hunt with them. After being very successful on my first, I thought I would try my luck with my archery skills. Encouraged by my long time hunting pal (Jeff Hintz from Wisconsin) Squid for short. We’ve known each other from the young age of five.

Ricky would be our guide and we knew that he would push us deep into the wilderness of Alberta. It started out so fast, our first hour we were stalking a bull, but no shot was presented. We saw moose everyday along with other wildlife such as elk, mule deer ,bear, whitetails.

On our second day, Squid had a close encounter with a large beast and I decided to carry my 300 cal for half a day to mellow out my nerves for a good archery shot. On day three Squid was willing to wack a bull with his primative weapon. After a close call on a young bull and having a blast with Ricky, we would be watching Squid arrow his first bull. What a blast. When we got back to camp there was just enough time for food, one beer, then sleep.

After turning down some other bulls, day four would be all mine. Back with my bow, Squid would carry my 300. Early morning Ricky had a bull responding to his call. After a nerve racking 25 min. with no show we would move in closer. Eighty yards would all we would have to move when the bull responded again. Ricky said it was a big boy. Ricky stayed in back of us and kept calling. I could only see 20 yards in front of me. After another 25 min. of holding my bow out, my pipes were like a noodle. It sounded like a semi coming through the marsh and then he made his appearance at 45 yards. Grass hanging from his rack and snot dripping from his nose, there was no clear shot. I thought we were going to get our butts kicked.

With this monster walking in on an angle I drew back. He stopped 30 yards from us. Dirty brush, tree clumps, and a bad angle would keep me from releasing my arrow. I just did not feel it could be a killing shot, so I waited. Meanwhile Ricky is watching all of this and starts to circle around our back. He was dressed in black and ready for an attack. He raked the brush and called him just to get me a better shot. The bull just moved his head and not his body and I couldn’t hold my bow back any longer.

Now Sid and Squid had a stare down of 10 min. with this beast. I don’t know if he was in love with Ricky or wanted to destroy him. During this 10 min. stare down I made a decision if he takes one step forward I would come back to full draw and if he took one step back I would have to make a exchange with Squid to grab my 300. Squid must have read my mind because he threw that 300 Weatherby into my shoulder when that bull stepped backwards. After some rather fast shooting the three of us would be high fiving each other. One hour and ten min. had past from the first cow call till the last shot. The bull would measure 49 inches.

After some lunch Ricky felt ill but he would not stay back and rest. He gave everything he had just to help us get this moose out. What a sport he is. Time for food, one beer and sleep.

Our camp had all the comforts of home. A lot of laughs from hunters all around. Everyone in this group filled their tag. Great cooking and the finest hospitality from Rick, Rita, Ricky and all staff. Thanks for the great hunt. To be continued….. I’ll be back, see ya then.