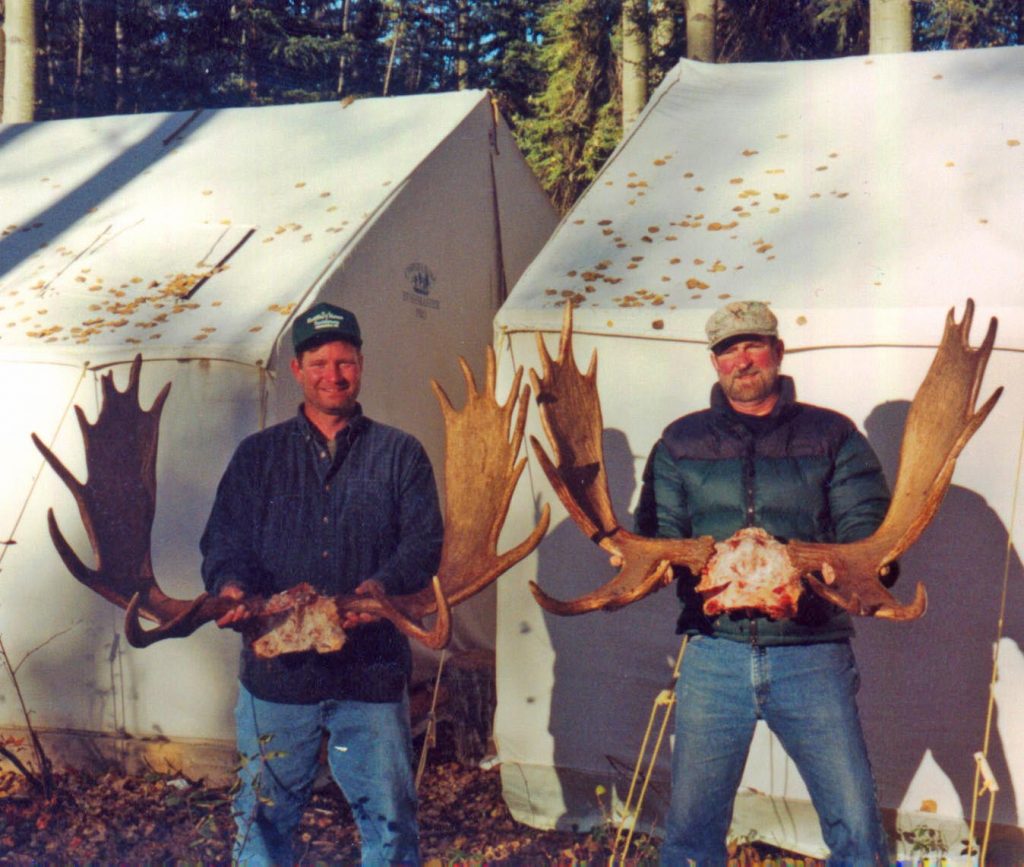 My father and I arrived in Grande Prairie and met the men who would be guiding us at Rick’s house. On the way out to camp, one of the guides asked us what we expected from the hunt. We told him we expected to hunt hard and give it our best effort to get a moose. His comment was “Great, that’s what we’re here for.”

The first day we were teamed up with Jake, an experienced hunter and a heck of a nice guy. Jake asked if we were going after big moose or just any moose. “Big” was our answer. Since two is company and three’s a crowd, we decided the first day I would hunt with Jake and my father would sit in tree stands. We would alternate each day until we had our moose. The first morning we dropped my father off at his tree stand then Jake and I continued on deeper into the bush on a cut line. The terrain was gently rolling and beautiful. The aspen leaves were in full color and looked like bright yellow saucers floating to the ground when the wind blew. We stopped at a beaver pond and Jake positioned me, told me where to watch, then backed off and began calling. About ten minutes into his seductive moaning and grunting, we heard “UGH, UGH, UGH” along with breaking branches and sloshing water. This continued for half an hour, then all was quiet. We circled the area and got the Bull to answer one more time before deciding he must have cows with him.

That evening we took a long ATV ride back into a very secluded area that gave us great views of bottom-land meadows which rose up into the golden aspen and eventually, higher up the mountain, became pines. Jake had an area in mind where he got into a large Bull Moose while hunting for himself the week before. It took most of the evening to hunt our way to the spot where action was expected. Along the way, Jake would remind me, “This is Trophy Bulls only, this far into the bush”. This was my kind of hunt, far from the roads with nothing in sight but wilderness. We started calling about an hour and a half before dark and almost immediately heard, “KA WUMP” then a few seconds later, “KA WAMP”. Jake said, “I know that sound. Two Bulls fighting”.

We moved higher on the hill into some pines and set up. Jake would cow call and a real cow moose would whine and moan while the two Bull Moose thrashed brush, trees, and each other. They were only about 50 yards away, but we could only hear them because of the dense bush. After a while we could hear one bull move up the hill, grunting as he went. The other stayed in front of us racking brush. Jake crawled up to me and said, “It’s going to get dark, we have to make this happen”.

I started walking right to the Bull as Jake walked behind me cow calling. After forty yards, suddenly there was a moose standing across the ditch thirty to forty yards away, but it was only a small bull! Then down the ditch we heard, “UGH, UGH” and here he came, waving his head from side to side. The setting sun gave his antlers an orange hue. He stopped and beat trees as he came up the ditch toward us. I picked an opening knowing he would be broadside at that point and “Yes, only 15 yards away”. The first shot was right behind his shoulder, but he turned and ran directly at us. I kept him in the scope but all I remember seeing was an enormous set of eyes coming at me. When it was all over, he was laying not 15 feet in front of us and the celebrating began. Jake was just as excited if not more that I was. The hunt couldn’t have been more exciting for the both of us if we had dreamed it the night before.

The rest of the week was spent swapping stories of the days events with a great group of hunters from Wisconsin and Minnesota. Of course it was hard to tell the stories because everyone was always stuffing their mouths with Rita’s excellent breakfast, lunch, and dinner. It was the first hunting trip I have ever taken where I returned home weighing more than I did when I left.