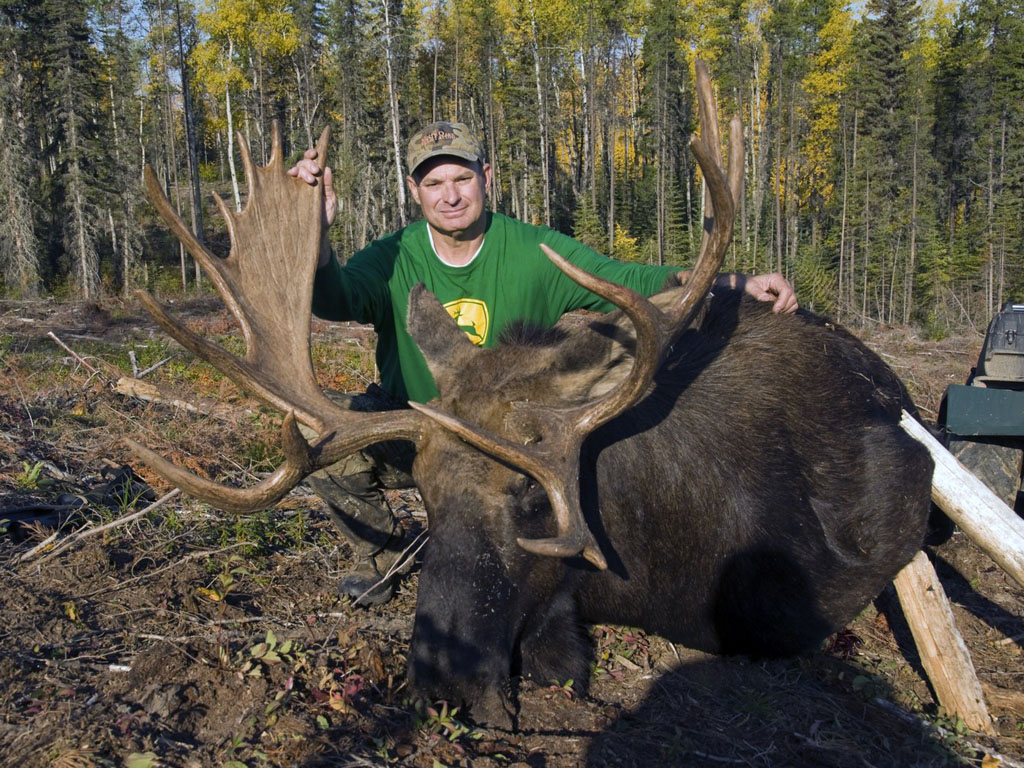 Once again, I want to thank you and express to both of you what a great adventure and hunt Bruce and I had.

As you can imagine, after having booked my hunt a full two years before, it was safe to say that I was eagerly anticipating my first day out with our guide Mel. Unfortunately, the first two days of our hunt were under torrential rains, nevertheless Mel kept us going, kept our spirits up and made sure we were always seeing moose.

With the cooperation of the weather on the third morning, Bruce and Mel were quickly into bulls and due to Mel’s intimate knowledge of the terrain and some fast and furious leg-work Bruce was suddenly staring at a gorgeous 52-in. bull. For some reason Mel knew exactly where this bull was going to cross thus giving Bruce a chance to set-up. When the bull finally stepped-out at a distance of 200-yds. all Bruce had to do was pull back on his 338 and down he went. One down, one to go.

That afternoon as we were returning from taking Bruce’s bull to the meat processor, Mel pulled off the road and pointed to a clear-cut area that he had a “hunch” about. At this point Mel had our undivided attention and promised me that we would be walking into that clear cut first thing in the morning.

At first light next morning, the first of the really clear and cool mornings with light frost on the ground, Mel pointed to what looked to be a big stump and whispered that it was a cow. After quickly taking cover behind some bushes Mel let out a cow call sequence which quickly produced a small bull, pulling him as if on a string to within 30-yds. Deciding to pass on this bull we proceeded to carefully move through the clear cut seeing several other animals, again passing them up. After a few hours of this Mel mentioned that for the afternoon hunt we would be returning to the same place.

I could not wait to get back to that clear-cut as there was moose sign everywhere and we had seen several animals that morning. Our strategy for this hunt was to be different from the mornings. Rather than move about and call, we decided to sit atop a large pile of tree limbs and glass the vast cut-over area. While sitting there we saw mule deer and several elk, but there was no moose activity whatsoever.

As the afternoon turned into early evening, Mel whispered that there was a small area at the bottom of the clear-cut that was hidden from our vantage-point and that we should quietly sneak into it. After a quick walk down one of the trails, we eased around a small aspen strand to see a cow ,a calf and a beautiful 44-inch thick racked bull standing at a mere 70-yds. Mel very calmly asked me if this is the bull I wanted and upon my approval motioned for me to rest my rifle on an uprooted tree. One well placed shot later and I was standing next to the largest and most regal animals I had ever seen.

Out of an eight day hunt, we ended up hunting a total of 4.5 days, during which Bruce and I saw 20 moose, 11 of which were bulls. The camp staff was friendly, the accommodations were great, the food was outstanding and you are operating in one of the best trophy-bull areas in all of Canada. Lastly, our guide and new friend Mel was amazing. He worked us hard, really hard, he is a “man of the bush” and he has complete command of a second language, the cow-call. He made it all happen for us.

Anyway, the deposits are in and we’re headed back, only this time there will be five of us. Until then I will wear-out the picture-album of the hunt and endlessly stare at the majestic European mount of my trophy knowing that I will once again experience this amazing adventure. I can’t wait!