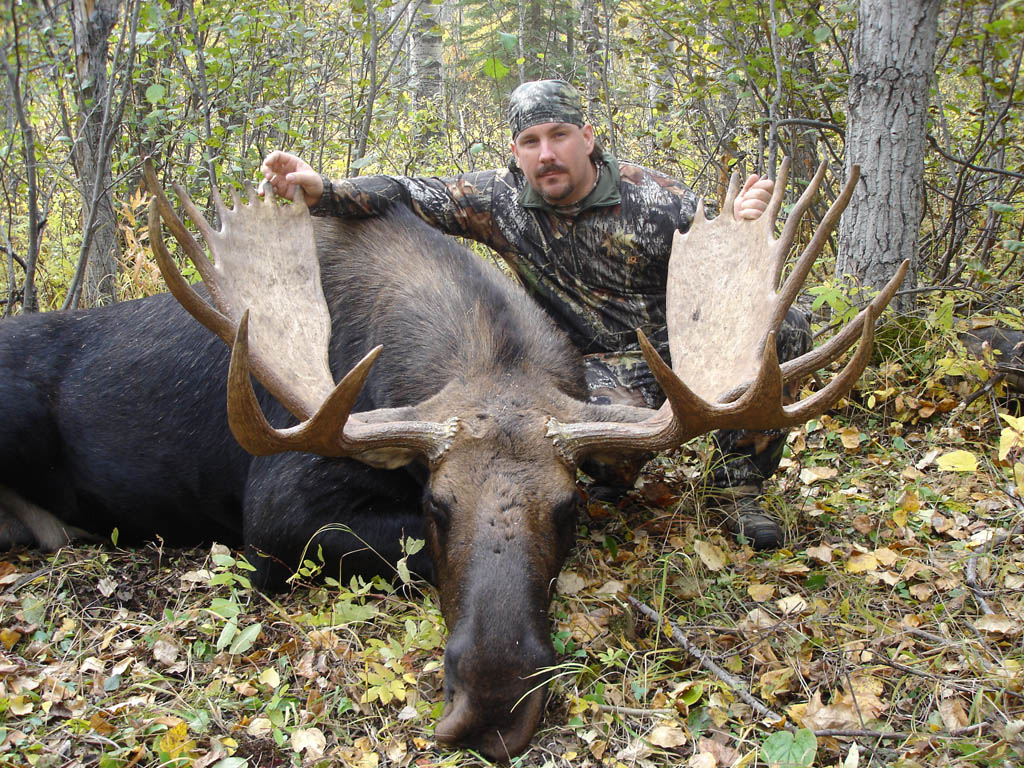 This was my first trip out of the United States to hunt. My uncle and cousin had been talking about hunting moose for quite some time. After two years of planning and 35 hours of driving we finally rolled into Grande Prairie, Alberta, Canada on September 27th at Rick and Rita’s for a hunt on the 28th. Once at their house we loaded into Rick’s truck for the ride to camp.

To go from hunting Missouri whitetail deer to Alberta moose, is quite a large step. My uncle and cousin and I agreed if we were lucky enough to bring back two moose to Missouri, it would be wildly successful after 8 days of hunting. We weren’t disappointed. We each killed very nice moose. In fact all three of our hunts were over in 5 days.

This was truly a trip of a lifetime. I’d gladly put this group against any other guide service anywhere. They know the country, the animals, and their business. The accommodations and meals were great. It was definitely the highlight of my hunting experiences. To have all 8 hunters be successful and kill moose is a testament to Rick and his teams dedication to your hunt.

On the day of our first hunt, my only day, we were in the woods well before dawn. Rick, the guide, Jim and Lisa from Indiana, my fellow hunters, and I all quietly listened carefully while Rick began his calling. We quietly walked an old logging road and cut blocks while Rick cow called. We had only been hunting about an 1 ½ hours when we came out of a large clear cut and broke into the woods when we heard a bull replying to Rick’s cow calling. We were on a small trail at the base of the ridge that was as thick with brush as I’ve ever seen. Rick had the other hunter move up and around the ridge on a little trail to get a better shot if the moose came down the hill to us. Rick began busting the brush with a big limb like a bull moose raking his antlers. Rick continued bawling and busting brush for several minutes while Jim, the other hunter moved up the hill on the trail. We all could still hear the bull grunting high on the ridge, but because of the thick brush we couldn’t see him or tell which direction he was travelling.

Rick sent me back up the trail we had come in on to where it leveled out at a “T” in case the bull circled around. As soon as I crested the hill and the trail opened up toward the ridge, I could see the big bull walking slowly down the hill about 70 yards away quartering toward me. As he walked through the brush he would slowly move his head back and forth raking brush and grunting. All I could see was his head and antlers; I couldn’t get a shot because of all of the thick brush. Rick continued to call and thrash the brush below me 40 or 50 yards away where I couldn’t see him. When the moose disappeared in the thicker brush I moved to an area down the trail where I thought I might get a shot if he kept his current angle the last time I’d seen him. I could still hear him grunting and raking brush as he walked slowly down the hill. He finally emerged about 50 yards away in the brush looking straight at me. This time he was standing right in front of a tree that prevented me from getting a clean shot.

Rick’s words the night before about how thick the brush is and how you may need to take a quick shot in a small opening kept playing in the back of my head. I had convinced myself that a quick shot would be all I’d have if I even got a shot at this moose. For what seemed like an eternity, which was probably only 7-10 minutes, the bull just stood and stared at me. I had enough thick brush in front of me to conceal me from the neck down. When he looked away I stepped up on two logs trying to get high enough above the brush in front of me to get a shot if he stepped forward. I kept saying under my breath that all I needed was for him to take two steps and then I could take a good shot while I’m trying to balance on these two logs.

Rick came up quietly and I told him the moose had just moved off slowly. Rick and I slipped into the brush, me following one step behind. We got onto a game trail to make the walking a little quieter.. Rick began cow calling again. We went just about 100 yards when we saw the moose standing quartering away at about 50 yards. I stepped out past Rick to one side and raised my rifle. Rick was standing just behind me to one side when he said “Get ready to” and I pulled the trigger. The bull turned and ran crashing through the brush and disappeared just over the edge of the hill and into the brush.

We walked to where the bull had been standing to look for blood. We found a good blood trail and could hear the moose thrashing around in the brush. Rick suggested we back out and not push the moose. On the first day, and in less than two hours my hunt was over. We recovered the moose about 40-50 yards from where I had shot him about 45 minutes later. Measured out my bull was 52 inches at his widest with beautiful long tines.

It truly was a great experience that I would recommend to anyone wanting to hunt moose. The area is beautiful with lots of opportunities to see elk, mule deer, bear, wolves, and whitetail deer. I’d highly recommend it.