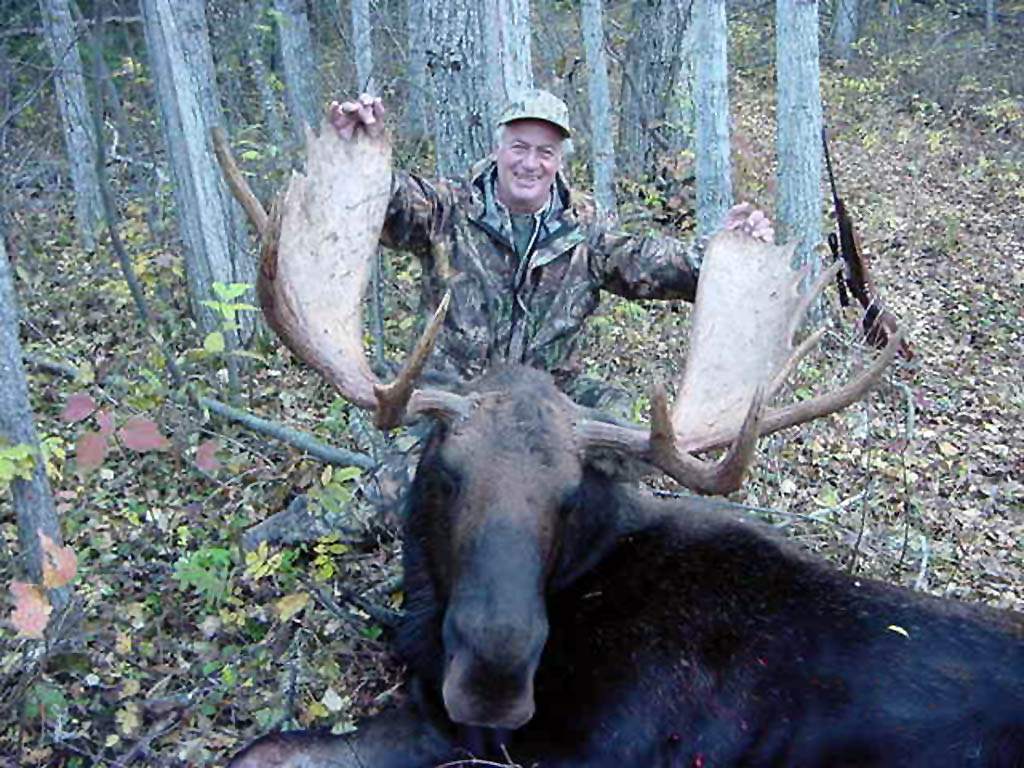 I talked to my son Bruce, to see if he might be interested in moose hunting, neither of us had ever hunted moose before. I didn’t take long for him to get on the internet and start checking the outfitters websites. After checking out many outfitters, we decided that Wild Kakwa was by far the best that we had found. We contacted Rick and Rita and found that they had three opening in the early hunt. We booked all three spots and with the addition of a close friend, Tony Johnson, began to make plans.

Bruce and Tony flew from Minneapolis, MN to Grand Prairie, while I decided to drive my pickup, taking most of our gear and coolers, the guns have to go with the hunter. I had a great trip up there, it was the peak of fall colors and the weather was perfect. We all arrived in Grande Prairie the same day, the 24th of Sept. The next day we met up with Rick, Rita and the other hunters at their home and then continued on to the hunting camp.

Myself, Bruce and our guide Ricky went out about 5 PM that same day to see if we could locate any moose. ( I think Ricky wanted to see if we could hike up and down the hills.) We must have passed the test because from then on we did a lot of walking. The first morning we got up early to a great breakfast prepared by Rita and Kelly. We drove to our hunting area that we had earlier agreed on and proceeded to hike and hunt about five miles, we didn’t see any moose that day. On the second morning after another large breakfast we went to a different area, as we were walking and Ricky was cow calling, about 8 am we got an answer from a bull that was very close. Ricky positioned himself behind and to the side of Bruce and myself and continued calling. Bruce and I had decided earlier that I would shoot first and he would Video record the hunt. Well it didn’t take long before we heard and saw the bull coming down a small game trail. As he was coming Bruce was recording and I had my gun up and ready and I could hear him whispering, don’t shoot yet, not yet, finally the bull was huge and within 60 yards when I shot, he made a big jump into the brush and disappeared and we could not hear him moving. I knew I had hit him good. Ricky came over and we waiting a few minutes to hear him fall, but that didn’t happen, Ricky decided to give another cow call and low and behold the bull came back out into the trail, it didn’t take me but a second to take a second shot, this time the bull jumped and ran about 25 yards and fell. We later could see that the first shot had taken the whole top of his heart off and the second went through both lungs. They don’t die easily. After many pictures and a lot of work we got the bull back to camp. He was a beautiful 51 ” Bull. It was pretty exciting on my first moose hunt.

On the third day of our hunt we spotted a small bull and called him in and then couldn’t get him to leave Bruce passed on that one and later that morning shot his bull at about 150 yards, it was a 36″ bull. On our way out of the woods after Bruce shot his, we literally ran into a huge bull, bigger than either one of ours, but our tags were full. On the fifth day of the hunt Tony got his at about 230 yards, Tony was hunting with Mel who is also a terrific guide. I think every guide that was there was very good.  Out of the Eight hunters in our group we got 7 bulls. Our group saw many Moose, Elk, Wolves, Whitetail and Mule deer.

Everything was well organized and in good condition. The tents, camp and especially the food and camaraderie was great. We are taking 3 more friends with us next year!