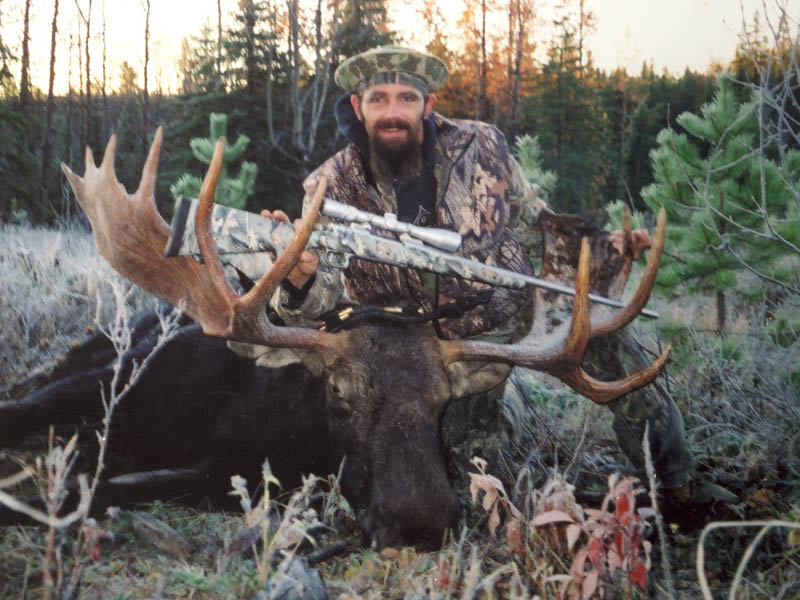 I woke up at 4:00am and the weather was cold & dry, with a heavy frost. I walked over to the cook-tent to eat some breakfast, even though I was so keyed up that I really didn’t feel like eating just yet. All I wanted to do was get out & start hunting. As I sat there and ate, we talked about where we would hunt, and how we would go about it, etc. By the time we finished eating I was so excited to get out there, that I almost forgot my gun.

We finally got into the truck and started the drive to the area we planned to hunt. We got there at first light and as we were getting out of the truck we saw a Bull standing in a clear-cut down a pretty steep hill. Couldn’t believe our luck. Rick Dahl, the guide decided to do some calling to try and get him to come closer for a better look. After he called awhile, we heard a bunch of noise coming out of the bush, and then we heard the moose grunt. Rick called some more and though we couldn’t see him, the bull grunted some more and began to come toward us. I saw him, my heart really began to pound. I tried to relax but that wasn’t working too well. The first thing to hit me was just how big he really was. Right then I knew that this was the bull I wanted. Rick said to wait and he would call some more and try to get him a little closer. Well it worked, somewhat, because he did come another 50 yards or so closer. He wouldn’t come any closer because he was with a cow and a calf. Rick asked if I thought I could make the shot, and I said yes. As I waited for him to give me the shot I wanted, my heart was really pounding away and I even started to shake somewhat. Finally he turned sideways and gave me the shot I’d been waiting for. I put the cross-hairs on him and fired. Rick said it was a good hit, and to give him another shot. I thought I missed, so I gave him another one which hit him in the spine and he dropped in his tracks. I was really shaking now, so I sat down for a bit to try and get myself together.After a few minutes, we went over to the bull. I made the distance in seconds and when I looked back for Rick he was still a ways off, but coming. I still couldn’t quite get over just how big he was. 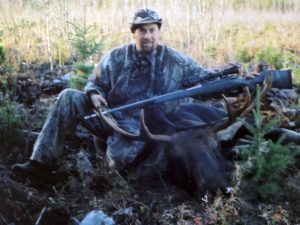 Jim Sette was happy with his 40″ bull It was a great hunt for both hunters
Rick, my buddy Jim and myself just admired him for awhile. Rick told me I did some fine shooting and I felt proud of that. Then we took a bunch of pictures. As we talked a little bit, Rick asked me how long of a shot I thought it was. I said I really didn’t know. Then he told me it was about 220 yards downhill. I thought to myself it sure didn’t look that far in the scope and I sure was glad I did a lot of pre-season shooting at 200 yards. Sure paid off for me and I guess the Good Lord was with me too. The whole trip was 10 times what I ever dreamed it would be and now my bull (54″) and my buddy Tim’s (40 inches) are both being mounted. Can’t wait to get them home now. Thanks ever so much for a wonderful time, and good luck in the future.